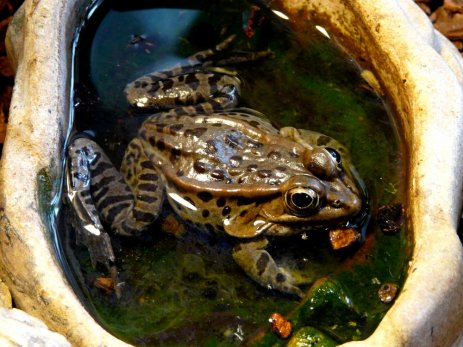 Back in the summer of 1999, I was in Petsmart and my son Jeff was only 8 years old. He was standing there looking at this big tadpole in a bag on the counter. The lady asked Jeff if he would like to take it home. It had come in with their feeder fish. Of course as a little boy his eyes lit up.

Jeff had tagged along with me on wildlife adventures since he was 7 months old.  How could I say no? It would be a great experience for Jeff to watch the tadpole grow into a frog and release him in our backyard pond – this was the plan at least.

However, this isn’t what happened. We took the tadpole home and set up an old aquarium – I knew I kept the old tanks for something. The tadpole starting doing what they do: sprouting legs, losing their tails, etc. It was an amazing thing to watch! Jeff spent a lot of time watching all of the changes taking place.

One day it became a frog, though it wasn’t a frog we could let loose here. With my experience, I realized that it was a southern leopard frog, an invasive species in Ontario.

I called Bob Johnson, curator of Reptiles and Amphibians at the Toronto Zoo and spoke to him about our frog dilemma. Unfortunately, he could not take him either. Our options were to either euthanize him or keep him. A southern leopard frog could not be released here due to bacteria he may carry that could harm our native species. I spoke to Bob on how to best set the frog up with his new home, because this was the only solution to the problem. We now had a pet frog, and he was a real cutie with a real personality!

Our new pet needed a name, and we unanimously decided that his name should be Sprout! After all, Jeff had watched him sprout up from a tadpole to a frog (and what a comical frog he turned out to be)! Of course, Jeff was thrilled. The thought of releasing his best bud to the outdoors was not what he wanted to do after watching it grow.

At one point, Sprout could jump so high that he bounced off the lid, so naturally,  Sprout’s tank had to grow as he did. So Sprout moved up to the attic again, in a tall 35-gallon aquarium that we used to keep our fish in. It was perfect for Sprout, and he loved it. He jumped and sang as frogs do, and jumped some more. The aquarium contained his mushroom ornament that he used to semi-hibernate in. Sometimes in the middle of winter you would hear this little croak from inside the mushroom ornament, just letting us know he was okay. He also had a nice big ivy plant in the aquarium that he loved to sit under. The aquarium also had natural wood chips, and for food: fresh crickets on demand! 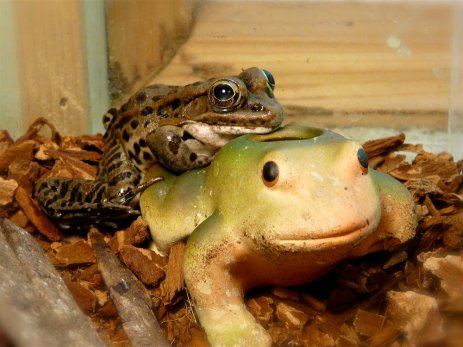 Sprout loved music, he loved company, he loved attention, and he loved life in general. The cats would sit and watch the crickets and Sprout would sing to them, as frogs do (though you could say he croaked at them).

As Sprout aged, he didn’t jump very much anymore, and had more trouble catching his food. I tried feeding him with tweezers, but that was unsuccessful – he needed to get the food for himself. I moved Sprout into a 10-gallon tank so that he could get his food more easily.

I firmly believe that Sprout lived to such a ripe, old age because we never handled him, keeping his environment as natural as we could.

He got a lot of attention from the outside, and a lot of loving – even when we cleaned his tank, we usually brought him out carefully in his water dish and put him gently into a big bucket with a screen on top.

In his younger days, we used to go for walks (or should I say bounce-abouts?). He was a slippery little guy, and he could move. He spoke to us when we came from an outing. He sang to certain songs on the radio. He joined in our conversations all the time. If you said hello, he would answer. He greeted the morning sun. He was one amazing little frog.

We have had Sprout for a long time – even Bob Johnson was amazed we still had him at last year’s Turtle Tally and Frog Watch appreciation day! Last winter, he didn’t even attempt to hibernate – he just enjoyed his pond and his food.

In his smaller tank, he could move around and get food more easily. He didn’t have to travel too far for anything. Sprout had become a senior frog. He was happy, and still sang to us. However, he got quieter as time went on. His eyes were glazing over. But Sprout perked up when we talked to him – he was a real sweetheart.

On the morning of July 30th, I woke up and went to turn on Sprout’s light, as I did every day. I had to take a real close look. I called out to him, “Sprout! Sprout! Are you okay?”. Sprout was gone. He was still in his water dish, with a couple of crickets by his side serenading him. He was all bloated up and very still. He was fine the night before when I turned off his light. There had been no warning – Sprout had just passed quietly and peacefully in his sleep. There is no better way than that, I suppose.

I had to break the news to Sprout’s long-time buddy Jeff, now 20, away at college, studying to become an Ecosystem Management Technologist. He still works with frogs. Sprout and him go back a long way – incredibly long.

All we did was give Sprout the best natural home that we could – from all of the great information that Bob Johnson gave us that day so long ago. And a lot of love, good music and natural attention. And of course, the best crickets that we could find. Accounting for his tadpole year too, he was 13. And now he is happily frolicking yet again in another never-ending world, singing and jumping freely.

We gave him a warm, loving send-off. And he was buried out beside our pond in the backyard with other frogs running around serenading him. And a happy-faced ceramic frog sitting on top keeping him company all day and all night, because Sprout was a very happy frog. He will be missed for some time to come if not forever. Jeff often says when he comes home, “I miss my little buddy”. That little voice that greeted him. God bless his little heart.

← Share the Road (as Published in the Wellington Times)
Blanding’s Turtle – by Isabelle, age 8 →