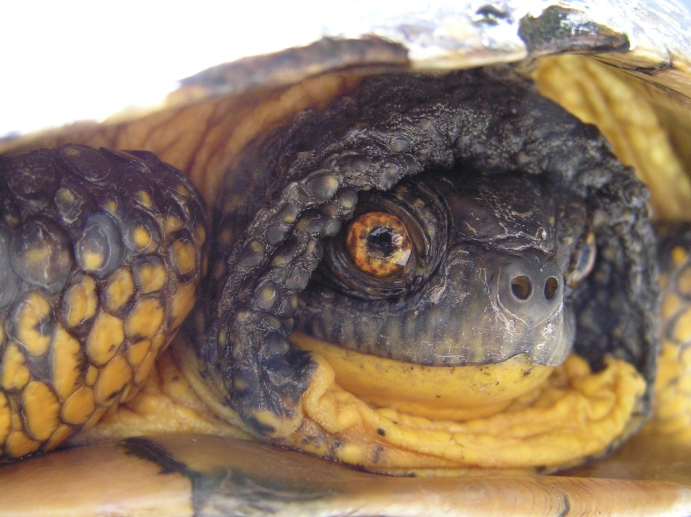 University professor of pharmacological and physiological science, Michael Ariel, Ph.D., found an eye opening revelation while studying pond turtles over the last 25 years. When turtles pull their head into their shell you would think their lateral sight (from the side of their head) would be blocked completely by the shell, obstructing their field of vision. Ariel found that some turtles have developed a way to compensate for their blocked view by using their eye muscles differently, depending on if its head is in or out of its shell. Eye movements of some turtles can work to view the world laterally, which is typical of many lower vertebrates, but also forward like many mammals, including humans.

There are six mussels that move the eye and they are different depending on if you have forward eyes vs lateral eyes. In an earlier study, Ariel and his research team made an unexpected observation that a nerve that moves one of the pond turtle’s eye muscles, the superior oblique muscle, was active when that turtle moved its head from side to side, much like that of animals whose eyes view forward. For example human eyes adjust their position when you move your head. When you turn your head to the right, your eyes move together to the left to keep the image you’re looking at within your field of view.

Generally, in nature, prey animals have lateral eyes to give them the widest possible field of view to better spot predators, easily seen in the eye locations on rabbits and deer. Predatory animals generally have their eyes positioned on the front of their heads looking forward, thereby allowing for better depth perception, such as in the eye locations of eagles and wolves.

So where do turtles fit?

Ariel says they are unique among all animals because they block their peripheral vision by pulling their heads into their shell. “Not all turtles can do this. A sea turtle, for example, cannot pull its head into its shell. We expected that pond turtles would be like other turtles and other lateral eye animals” said Ariel. “That wasn’t the case. Surprising, their eye movements can also be like that of humans.”