Fun Fact: Turtle Embryos Favor the Warmest Side of their Egg! 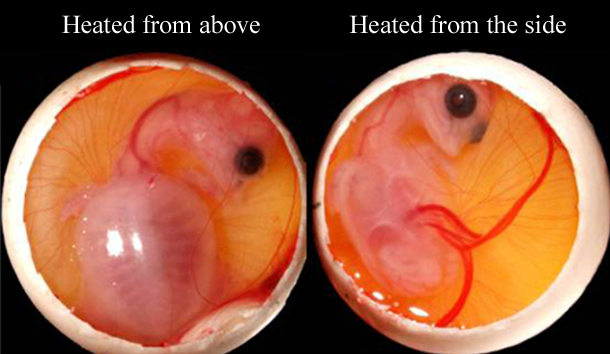 An article published in the Discover Magazine blog summarizes biologist Wei-Guo Du from the Chinese Academy of Sciences findings that the embryos of Chinese softshell turtles “bask” inside their eggs.

Turtles are ectotherms, or “cold-blooded,” which means they have little to no ability to produce internal body heat, so the heat that drives physiological functions, such as the breakdown of food into energy, comes from external sources like the heat from the sun.

“People usually think reptilian embryos are immobile,” says Du., “To our knowledge, no previous study has looked for [embryos to moving], presumably because embryos were thought incapable of such behaviour.”

When you think of a turtle embryo, it is hard to picture their tiny body physically moving them around, and in the egg there are not a whole lot of places to move to, but these little guys are on a mission! Amazingly, Du found that the embryos can not only move, but they snuggle up to the warmest side of their eggs.

Du’s experiment consisted of collecting 260 softshell turtle eggs and placing them in individual containers, with one side of the container being one degree Celsius warmer. After a few days, he found the embryos had pressed up against the warmer side of their egg, but they didn’t just stop there! When Du moved the heat source around, the embryos followed the warmth.

Du also buried 540 softshell turtle eggs in more natural nests, either in a flat field or a sloping river bank. He arranged all the eggs so the embryos were sitting at the top of the egg shell. After 20 days, the embryos with the sun warming them from above stayed in their upright position, whereas, the embryos buried on the slope, shifted towards the angle of the sun.

In the world of a developing turtle embryo, temperature affects how quickly it grows and when it hatches. Du found that a one degree increase can result in turtles hatching, on average, 4.5 days earlier; a big deal to an egg bound turtle at risk of predation, temperature fluctuation and drought.

You can read the full story HERE.

We have our very own softshell turtle here in Ontario, the Eastern Spiny Softshell (Apalone spinifera), which inhabits the large river systems of southwestern Ontario. This softshell turtle is the only turtle in Ontario with a flexible, leathery carapace (upper shell), which makes it hydrodynamic and an incredibly fast swimmer.

The Eastern Spiny Softshell is generally found in rivers with a soft bottom, ample aquatic vegetation and sandbars or mudflats. Their soft bodies make them vulnerable on land so they live primarily under water. In fact, these turtles can absorb oxygen through their skin while under water, and in the right conditions, can stay submerged for up to five hours at a time.

The Eastern Spiny Softshell is currently listed as Threatened, both provincially and federally. One of the many problems facing our softshell turtle is their illegal harvest for food markets.

You can help turtles by anonymously reporting suspicious activity to Crime Stoppers or to the Ministry of Natural Resources and Forestry tip line (1-877-TIPS-MNR, 1-877-847-7667). This can include anything from actually witnessing turtles being collected from the wild, to a native species seen at a pet store or restaurant, to persons carrying snares, nets, cloth bags or buckets in wetlands.

You also can report your sightings of wild turtles to Adopt-A-Pond’s Ontario Turtle Tally. These sightings will aid biologists, conservation groups and authorities in locating “hotspots” where turtle stewardship is needed, and help to monitor the current turtle population. 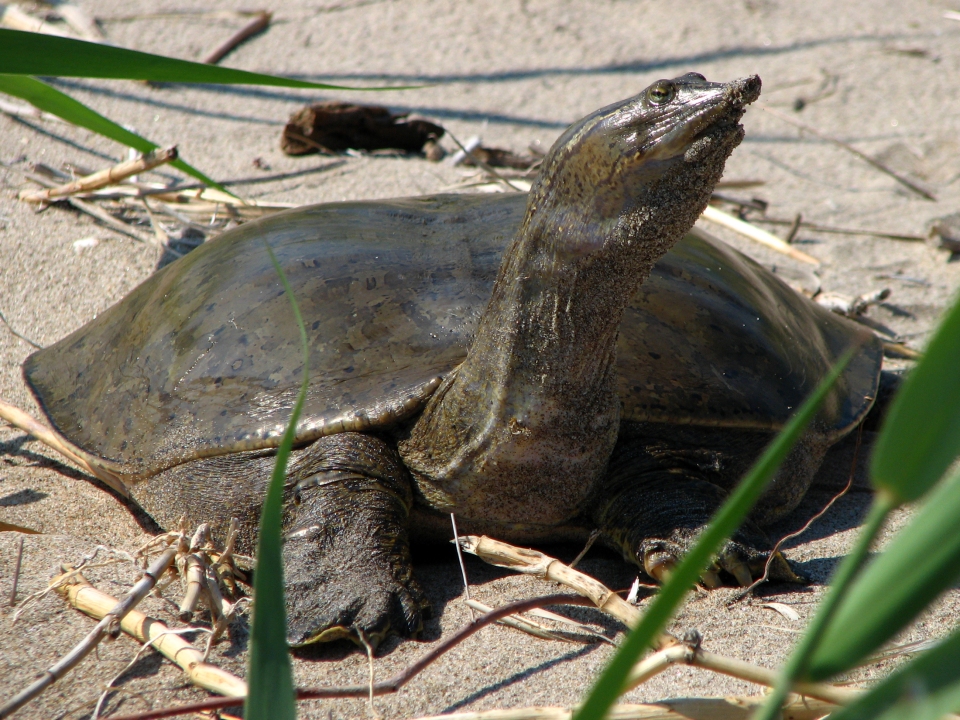