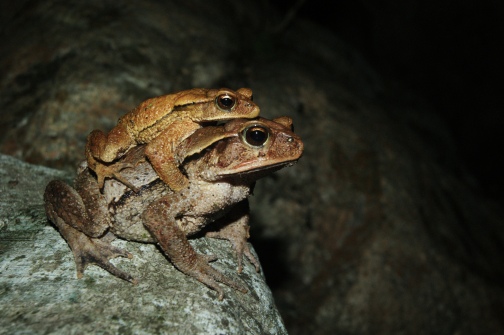 Did you know that Mexico is ranked as the fifth country in the world in terms of highest diversity of amphibians? However, more than half of them are endangered. The amphibian conservation project, ‘Anfibios de Puebla’ by Africam Safari will help protect two critically endangered endemic Mexican species. This project needs your votes in order to win funding that will go a long way towards saving these amphibians.

The contest, ‘Por Amor a Mexico’ or ‘ For the Love of Mexico’, is run by Volkswagen Mexico, and supports conservation of Mexican species and ecosystems. ‘Anfibios de Puebla’, which translates to ‘Amphibians of Puebla’, beat out 40 other projects and is now in the finals, where the winner will be decided by voting. The winning project will receive 500,000 Mexican pesos, or roughly 25,000 USD. The money will be used to initiate or continue conservation efforts of two species: the large-crested toad (Incilius cristatus) and the axolotl (Ambystoma taylori). Both of these species are endemic, meaning that these species are found only in Mexico. If they receive the funding, Africam Safari will be able to continue their large-crested toad captive breeding program which has been on-going since 2012. The large-crested toad only inhabits the cloud forest, a fragile ecosystem that is disappearing, which caused speculation that these toads were completely extinct. In the late nineties, they were rediscovered in a single location in Puebla, Mexico. Since then, Africam Safari has released over 800 large-crested toadlets to boost the population in Puebla.

The funds will also go towards conservation of the axolotl, commonly referred to as the ‘Mexican Salamandar’. The axolotl’s habitat is limited to one crater lake in southern Mexico called Alchichica, which provides the deep, brackish and alkaline waters that this species requires. Unfortunately, recent land use for agriculture is causing this lake to become polluted and its’ water levels are dropping. To save this species, Africam Safari will work with local authorities and communities to improve the health of this lake by re-vegetating the lake and its’ banks, improving irrigation techniques and decreasing pesticide use in the area. Because these efforts will be on-going and will likely take decades to completely reverse the negative impacts that land use changes have had on the lake, they also plan to start an assurance colony for the species. This captive population will be crucial to maintain a rich reservoir of genetic and demographic material that can be used in the future to reinforce or re-establish their population in this lake if their numbers continue to decrease.

To vote for this project and to help protect the large-crested toad and the axolotl: