A Day in the Field: Sneak Peek into a work day of a Field Technician at the Adopt-A-Pond Program, by Devanshi Kukadia

I got this amazing opportunity to work as a Wetland Conservation Assistant at the Toronto Zoo’s Adopt-A-Pond (AAP) Wetland Conservation Programme in the summer of 2018. I am rightly calling it amazing because I got involved with multiple AAP activities such as radio tracking of Blanding’s turtles, road surveys, turtle trapping, frog loggers, snake surveys and public outreach all in just a short span of four summer months. Little had I thought that this opportunity was going to turn into the most fun job I have ever had. It was exciting to work with highly dedicated AAP staff who are passionate about wetland conservation.

I am lucky that my job is not one where I spend all day behind a computer waiting for the day to end and where the outdoors are only reserved for weekends that fly by in the blink of an eye. Each morning, I hop out of my bed just at the very thought of spending a fun-filled day outdoors in the wetlands.

My typical day at work begins with reporting in at the AAP office for a pre-planned field schedule, such as turtle trapping in the morning and road surveys in the afternoon. I go to the lab where all the equipment is stored and get ready. I pick my chest waders, collect data sheets and trap kits and head out to the trap sites. Basking traps and baited hoop traps are laid in the wetlands of the Rouge National Urban Park from May to August to monitor turtle species. Traps need to be checked daily to minimize the duration of capture for each turtle. My field partner and I reach our first site where, sadly, there are no turtles. We replace the baits in the hoop trap and move to the next site where we find a big Snapping turtle. We quickly move the trap from water to land and release the turtle. I record measurements such as carapace and plastron lengths and widths, height and weight, while my co-worker is holding its shell tightly on its hind side. This turtle is a massive female and weighs 28 pounds! We calm her down by covering her face with a cloth and quickly insert a PIT tag, which is like a microchip that allows us to track her. We also give her a unique marking called a notch code on the edge of her shell to identify her in future. We double-check all the recorded information and then happily let the turtle swim away to her sweet pond!

At the next site, we find a recaptured Painted turtle. We re-record its body measurements and read its notch code and PIT tag code before releasing it back into the pond. We check 12 more traps by noon; some traps have new and recaptured turtles whereas some are empty that day.

Turtle trapping is important to gather information about how the populations of each species of turtles are doing in that area. We check the numbers of males, females and juveniles to determine the reproductive potential of the population. Repeating this study over several years and recapturing the turtles from previous years provides an idea on their growth and survival. Monitoring turtles yearly also helps us determine disease or abnormalities in populations, which can be mitigated at an early stage.

After lunch, I prepare to leave for road surveys with my co-worker. We switch our footwear to running shoes, wear our safety vests and helmets, fill up a bottle of water and head out with our data sheets and a GPS. We walk two road transects in the afternoon. These transects are fixed lengths on the road (2.5-3 km) passing close to a variety of natural and human-modified habitats like swamps, ponds, forests, farms and urban infrastructure. These habitats house a variety of wildlife species that cross the roads to reach the other side for foraging, mating or dispersal. Wildlife often fail to make it across the road and get run over by a fast moving vehicle. We start walking on the side of the roads, keeping our eyes open intently for any animals that have been hit – be they tiny frogs, baby turtles or a huge raccoon. We record the GPS location of any roadkill and determine the surrounding habitats. We then carefully move the roadkill off the road to avoid recounting and to discourage scavengers from coming onto the road for a meal. I only realized the great extent of loss of biodiversity on the roads when I started conducting road surveys. I encountered a plethora of birds and butterflies as well as camouflaged snakes and frogs.

Road surveys help determine the extent of loss of biodiversity due to roads. It gives information on which species are found in an area including cryptic species like smooth green snakes or a star-nosed mole that we don’t see very often. Road surveys help identify and delineate ecologically significant areas for wildlife and wildlife crossing areas that would benefit from fences, culverts, wildlife crossing signs and/or speed-breaking mechanisms.

It is advisable to keep a watchful eye out on the road and drive at the posted speed limits to be able to spot and brake safely for the animals crossing the road, especially during the spring and summer when many are very active. 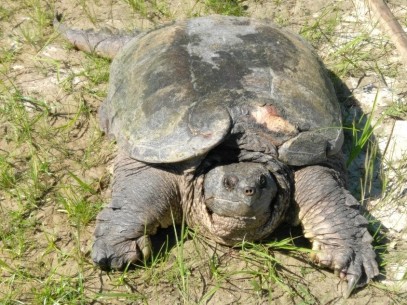 ← Frogs in Peril by Matt Ellerbeck – Frog Conservationist
Substantial number of turtle and frog submissions to Ontario Turtle Tally and FrogWatch Ontario in 2018, by Nina Adamo →