After a late start and much uncertainty about how this year would look, seasonal Field Technicians Nina and Carolyn are finally back on the Adopt-A-Pond team! We are so happy to be back, and although we have a lot of field work that needs to get done, we are really enjoying it.

Above left: Field Technician Nina hold a milksnake found beneath one of the snake cover boards during snake surveys.

Above right: Field Technician Carolyn out in the field holding a wild adult Blanding’s turtle named Clementine, who the Adopt-A-Pond team has been tracking for many years.

One of our favourite tasks is caring for the one-year old headstart Blanding’s turtles here at the Zoo, ensuring they get the best start to life before they are released into the wild next year. Watching the turtles eating, swimming, and basking is so cute. We love knowing that in a year they will be out in the wild, re-establishing a Blanding’s turtle population in Rouge National Urban Park. It’s also pretty incredible how much these little guys will grow over the next year! From the photo below to when they are released at the age of two, they almost double in size. 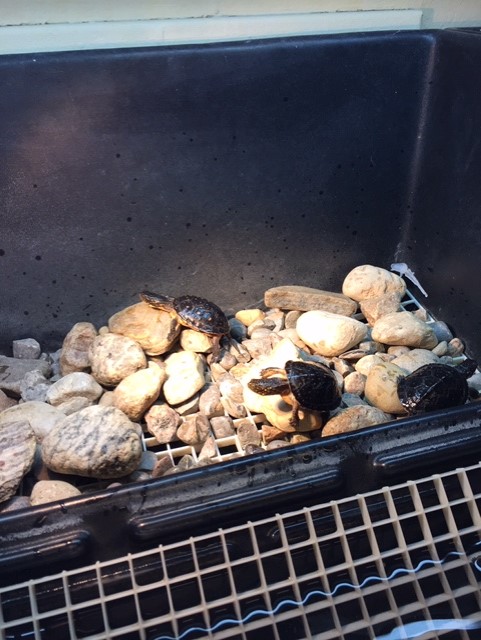 Above: Three one-year-old Blanding’s turtles in their tank, recently moved from their exhibit in the Americas pavilion to the Wildlife Health Centre, where the Adopt-A-Pond staff will care for them until they are released next year.

In the field, we have been tracking the Blanding’s turtles that were released in June and a few that were released in previous years. These headstarts are moving all throughout the wetland from their original release pond, looking for habitat that they like the best that will help them survive this very dry summer. We are aiming to take body measurements once a month to get a sense of their health in the wild. They definitely make it a challenge for us to catch them by constantly swimming and hiding under the vegetation and the mud. We both have a favourite turtle, that we have unofficially named after ourselves. We picked our favourites because they were the first ones we measured while tracking.

We also track two wild adult Blanding’s turtles that have been in the study for years – Raymond and Clementine. They tend to spend their time in deeper water, so we get to canoe around the marsh to locate them. We love tracking these two because the canoeing is so peaceful. We also have the opportunity to see a lot of other cool wetland species, like Belted Kingfishers and Great Blue Herons.

Above: Clementine, a wild female adult Blanding’s turtle, is seen here during a transmitter change in July. Transmitters must be changed each year or else the batteries will die and the turtle will no longer be able to be tracked.

The other main field task that we have is surveying for milksnakes using artificial cover boards. Each milksnake has a unique and beautiful pattern and colouration, which can be used to identify each snake as an individual, similar to human fingerprints. This makes finding them so much fun, as long as they aren’t too bite-y (luckily, they don’t typically bite). Finding a milksnake under the boards is our favourite part of field work. We have three existing sites that we check once a week. Thanks to our partnership with Parks Canada, this year, we are able to set up 10 new sites throughout Rouge National Urban Park. These new sites will allow us to get a better understanding of the milksnake population range and demographics within the park. Finding a milksnake under the boards is really exciting; it makes trekking through the tall grass meadows (that are full of holes, fallen branches, and fences) worth it!

Above: A few of the milksnakes that were found under coverboards so far this field season.

We’re so excited to be back working with Adopt-A-Pond and are looking forward to the second half of the field season!

← My Experience in Forestry: Indigenous Engagement & TEK
Eggs and incubation and hatchlings, oh my! →