When I started my co-op placement here at the zoo one of the first activities I got involved with was go out on the field. I assisted the two amazing Field Technicians, Brianna and Célise, in turtle tracking. I was able to spend my time in natural and restored habitats, collecting data to see how animals are using these areas that are surrounded by the most urban centre of Ontario.

One of the beautiful spots I get to do field work in!

The Zoo Staff raise turtles from the time they are in their eggs and release the turtles into wild habitats when they are about 2 years old. These turtles are called “head-starts”, as their time in the captive environment gave them a head-start in life, and means that they are larger when they go into the wild habitats, so this should make them better able to overcome threats and challenges and increase their survival rate. The areas where the turtles are released are areas where these species were present historically, but human-related threats severely damaged the population, to the point where it would not be viable without conservation intervention. 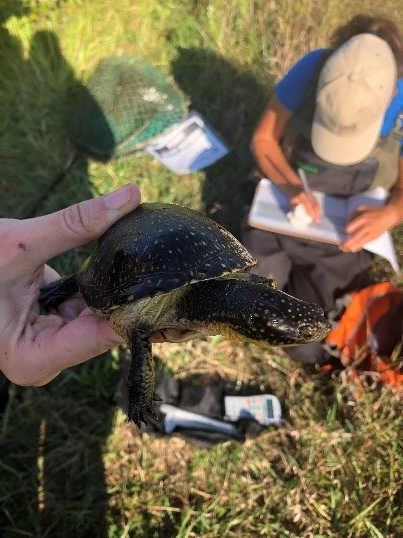 A juvenile Blanding’s turtle handled to collect measurements and attach a transmitter to his/her shell.

Zoo Staff keep up with the turtles by tracking radio transmitters that were attached to each of the turtle’s shells to ensure that they are living, and to record information about their growth, seasonal movement patterns, and habitat use. On the first day of doing field work, I got to see a tracker being attached to a Blanding’s turtle! This was very special, as this is a threatened species in Ontario, which can be rare to see. I hope that this work will lead to stronger population of Blanding’s turtles in the Toronto area for future generations to learn about and enjoy.

Every week for the past few months I’ve been helping to track turtles and record information on their location as well as the habitat type they were found in. Doing this allowed me to learn how to identify different plants that surround the turtle’s habitats such as coon tail and chara. This information allows us to gain more knowledge on their well-being, and habitat so we can continue to release them in suitable areas to live. Without suitable habitat, animals that are raised in captive environments will continue to face challenges. The Adopt-A-Pond team works with partners like Parks Canada and the Toronto and Region Conservation Authority to restore altered habitat and create corridors to connect wetland areas so that animals, like turtles, can move safely between these different areas to access resources like food, mates, and shelter.

Although this juvenile Blanding’s turtle got its front leg bitten of by a predator, he’s been doing well and continues to get tracked regularly by the Adopt-A-Pond Team.

Field work is one of my favorite jobs to do as I get be outside enjoying nature and be on my feet.  Now that winter is here, tracking only takes place once a month as turtle’s don’t tend to move during the colder months. In Ontario, turtles can spend 5-6 months each year in a hibernation-state, and tracking them in the winter gives us a more complete picture of the turtles’ health year-round. The Team continues to track in the winter so that information about this cryptic stage in their lives can be recorded. If we only see what happens when turtles are out-and-about in the spring and summer, we’ll miss half of the picture!

I’m very grateful that I was able to learn the skill of tracking turtles using the proper equipment!